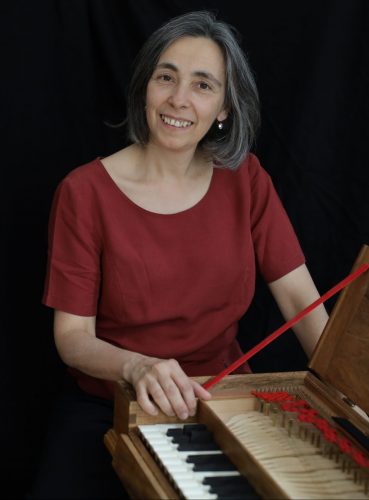 Suzana Mendes was born in Lisbon in a family with no particular musical background. She studied piano, harpsichord and music pedagogy, and followed further studies on harpsichord and Early Music in Amsterdam, Oslo and Cologne. She studied with Ketil Haugsand and Richard Egarr, and participated in many courses for early music where she worked with some of the best specialist in this area. She dedicates special attention to Iberian music of the 16th and 17th century, and in this field she has worked with M. S. Kastner, G. Doderer, C. Rosado Fernandes and Luisa Morales.
She appeared throughout Europe as a solo performer as well as a member of several ensembles. She has performed on album and radio recordings, and played with Ensemble Resonanz, Concerto Koeln, Cordate, Harmonia Parnassia and Ensemble Affetto, amongst others. She has been correpetitor and tuner at the early music courses of Academia de Música Antiga de Lisboa.

Suzana also plays and teaches the clavichord, a most sensitive and learn supportive keyboard instrument.  She teaches harpsichord at the Institute for Church Music at the Robert Schumann College for Music in Dusseldorf and at the Bonn State School of Music. Her teaching style denotes her passion for neuroscience and its practical approach to support learning and developing musical skills. She regularly gives masterclasses in chamber music and keyboard playing throughout Europe and is passionate about inspiring professional and amateur players developing their potential in a most competent and inspired way.

Listen to some Audio Samples: